Short on Time? Burn Over 400 Calories In Just 20 Minutes

by Tom Grow | Workouts That Work 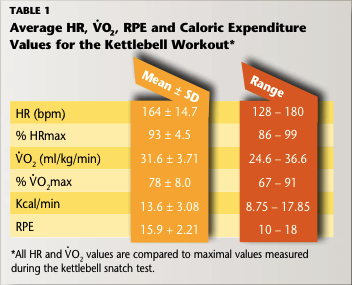 Even The Quickest, Most Basic Kettlebell Workout Will Melt Your Fat Off Like Butter

There was a study done by Ace Fitness, led by John Porcari, Ph.D., and Chad Schnettler, M.S., at the University of Wisconsin, La Crosse Exercise and Health Program. After taking baselines of their test subjects (another word for guinea pigs) based on a treadmill workout and a five-minute snatch routine, these 10 kettlebell-experienced volunteers, male and female, between the ages of 29-46, performed a 20-minute basic kettlebell snatch routine. A 12kg, 16kg, or 20kg kettlebell was used, depending on gender, weight, and experience level of each subject.

If you don’t feel like doing the math, we’ve done it for you. This workout will cost you 404 calories. And they can keep the change… because, don’t forget, that your body will continue to burn some calories for some time after your workout.

Here are the 20-minute workout details:

It doesn’t sound like much, does it? Well, looks can be deceiving.

The volunteers who performed the workout above had their heart rates monitored at 60-second intervals, as well as a blood lactate test immediately after the workout was completed.

You Can Have Results Like This With A Kettlebell And 20 Minutes!

If you don’t feel like doing the math, we’ve done it for you. This workout will cost you 404 calories. And they can keep the change… because, don’t forget, that your body will continue to burn some calories for some time after your workout. It may not be like the 400+ calories, but consider these calories freebies.

But that’s not all, folks!

The average HR (Heart Rate) during this workout was between 86 and 99  percent of the kettlebell HR max for all subjects (fig. 1). The average HR was 93%, but some averaged 99%. 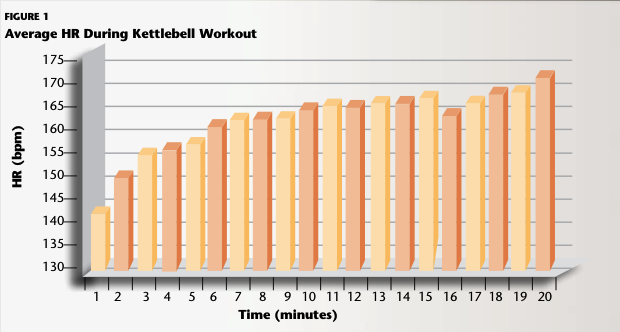 Your Heart Will Take A Healthy Beating

Why is this routine so effective? Snatches involve the movement of the entire body, not like an isolated muscle exercise such as the infamous bicep curl. Pair the whole body movement with the fact that it was done very quickly due to the interval-training approach, and you have a killer 20-minute workout.

Of course, you shouldn’t do this workout every day. You should vary your routine sometimes. You’ll lose more weight in this routine, which is of a much higher-intensity workout than the standard weight training routine. Better still, you’ll also be giving yourself a workout that improves your aerobic capacity.

So, there are no excuses. If you’d like to burn an additional 400+ calories a day, take out twenty minutes and your kettlebell, put on your wristwraps, and get to work!