The Commercial Corruption Of The Kettlebell

The Kettlebell Has Gone Sissy. Sigh.

Ok, I guess since the kb is going mainstream, I shouldn’t be surprised to see it… but it still makes me wince. I’m curious what you think. 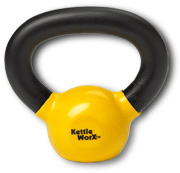 I Mean, Seriously. A 5 lb. Kettlebell?

When I started out with kettlebells, way back in like, 2000, the smallest size kettlebell you could get was the 1 pood (16kg – about 35 lbs.). Back then, there weren’t incremental sizes… you went from a one pood to a two pood. No in-between. In fact, when Dragon Door starting out with incremental sizes, the crowds (“The Party”) went wild.

Then Dragon Door made another great move. They departed from selling only the traditional one pood size and up, and went downward instead. Creating the 12kg and even the 8kg kettlebell allowed more people, particularly the average build female, as well as younger gireviks to enter the world of kettlebells. 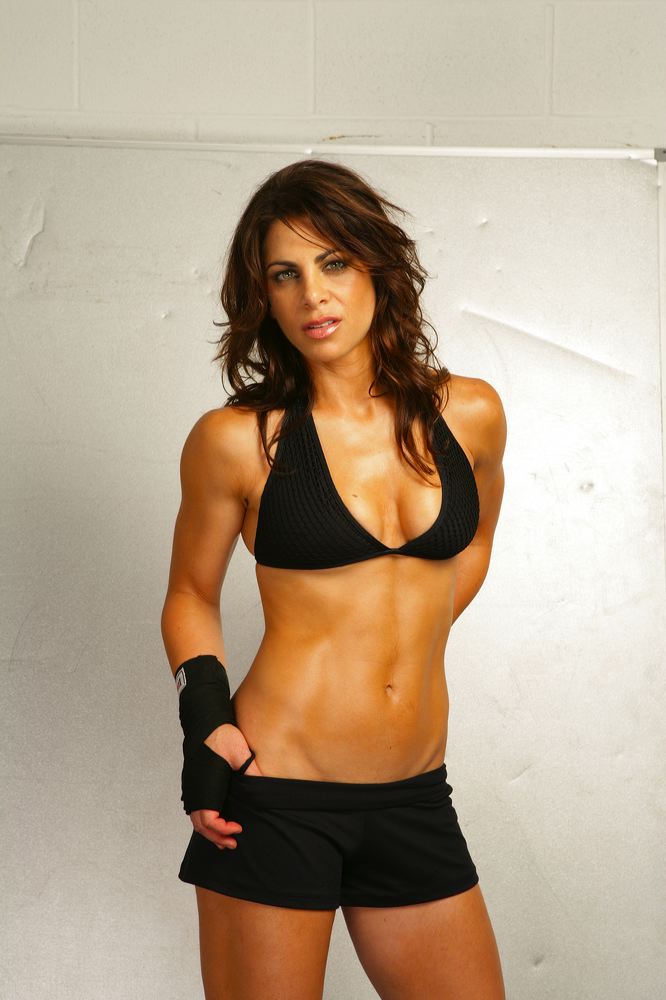 Eventually, the popularity of kettlebells grew until the inevitable happened. Once the kettlebell hit the commercial mainstream, people who had ZERO ideas about kettlebells or the culture behind it began to try to make their quick buck. Those who ate kettlebells for breakfast absolutely groaned when they saw Jillian Michaels supposedly “training” contestants of “The Biggest Loser”. She even gave kettlebell training tips on the show for the innocent viewing audience. And what really busts my bell is the five pound kettlebell by KettleWorx, and similar sized kettlebells by other commercial corrupters. Yes, that’s right. Five pounds. It looks like a pacifier. Can you say “Mini-Kettlebell”?

What can you possibly do with a five pound kettlebell? Seriously. I guess you can jog with one, the way you do with Ken and Barbie dumbells… but you’ll look like an idiot! Personally, I found even the 8kg kettlebell hard to work with, because it is so light. For example, when doing a snatch with an 8kg kettlebell, it’s hard to really feel the momentum. It’s so easy to simply hold the bell in place with a halfway-firm grip on the handle, that it’s really difficult to work with.

The miniature kettlebell is perpetuating the softening of America. If the rest of the world follows, we will see a new generation of out-of-shape wimps.

But I guess I understand. There are some people out there that would have a difficult time even with an 8kg. I suppose that there may be someone out there that would find a 5 lb. minikettlebell useful out there. For example, maybe someone like Romeo Dev. I can even see this being a good size for someone going through some sort of physical therapy. But it’s not like they’re presenting this as a therapy tool. Rather, they market it as simply another size. To make this a mainstream size… that’s just laughable. 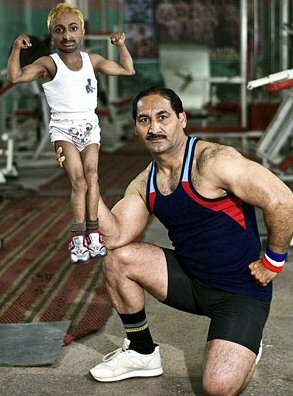 Aditya Romeo Dev Can Be Excused For Working Out With A Mini-Kettlebell.

But it gets better.

KettleWorx isn’t the only player in the mini-kettlebell world. Jillian Michaels sells her “ultimate” (Ahahahahahaha!!! Um, sorry. Got carried away.) adjustable kettlebell that can be adjusted in weight from five pounds to 20 pounds. We also have well-known brands such as Marcy, CAP Barbell, Everlast (They call it a “kettle weight”. Yeah, you heard me right), and yes, even Weider. Weider?!!! Say it ain’t so, Weider Joe! (RIP. I wonder if Joe would turn in his grave if he knew what his company was marketing now.) Come on guys! You should all know better!

At least Gold’s Gym, Go Fit, Valeo, and Dragon Door have drawn the line (so far) at 10 pounds. I don’t think a ten pound kettlebell is so unreasonable. I wouldn’t even call such a kb a “minikettlebell”. I mean, I think for men and athletic women, this would rarely be used. But for the less fit, I think a 10 lb. kettlebell is probably about the smallest you can get and still be practical.

…these tiny, little kbs have their place. They should be sold in shops that specialize in personal therapy supplies, or even on shelves in the toy department. 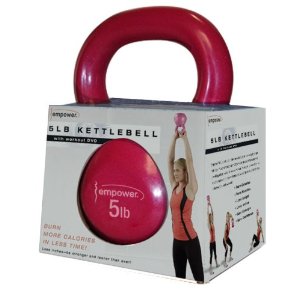 So anyway, the list goes on. There’s no surprise that Danskin has given us a feminine pink five pound kettlebell. MBody has a nine pound kb. Body-Solid makes a five pounder. J Fit has an 8 pounder, while Empower gives us the handy 5 pound kettlebell, in a box. (What’s that? Your lunch box?) The Firm has their own DVD and 5 pound kettlebell set.

Even Gaiam has decided to jump on the bandwagon by selling the Kettlenetics Slim & Tone Kit, complete with a 4 pound kettlebell. Finally, the grand prize goes to well-known trainer Kathy Smith for her “Kathy Smith’s Kettlebell Solution“. Yesirreebob, this is quite the starter kit… you get a DVD (complete with a picture of her, on the cover, doing a BICEP CURL with her minibell), a workbook, and not one, but TWO kettlebells! Ooooooh! Did I mention that the big, advanced size kettlebell is a 5-pounder? Yep, the other is even smaller… It weighs in at a very intimidating THREE POUNDS! Careful! Don’t injure yourself!

I guess I’m just ranting here. I mean, I guess that these mini kettlebells can have their place in a more cardio-centric workout or in physical therapy, such as for shoulder injuries. Exercises that incorporate a medicine ball could be ideal for a mini-kettlebell. (Heck, are there any excercises that incorporate a tennis ball? We could sub out the three-pound kettlebell for it!) So I’m not saying that they are useless. I just can’t believe that these are being sold on the shelf as the “starting weights” for the mainstream, general public. I actually read on one site that the 10 pound kettlebell is recommended only for the advanced student. By “advanced”, do they mean someone really advanced in age? Like 105? I mean, I know that not everyone is in the best of shape… but a person not being able to do a proper two-hand kettlebell swing with a ten pound kettlebell is going to be the exception. So I can’t see justifying the expense of putting the product on the shelf for everyone to consider as an “advanced” weight.

The miniature kettlebell is perpetuating the softening of America. If the rest of the world follows, we will see a new generation of out of shape wimps. 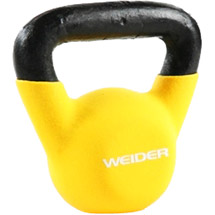 Say It Ain't So, Weider Joe!

In all fairness, again I say that these tiny, little kbs have their place. They should be sold in shops that specialize in personal therapy supplies. That’s why I can’t be too critical of Fitness by Cathe (Altus). They do offer a four pound, six pound, and eight pound kettlebell… but it’s actually just a medicine ball with an attachable handle. At least they are promoting it as a medicine ball that can convert to a kettlebell, rather than outright trying to pass it off as a “real” kettlebell.

I think it’d be reasonable to see these on the shelves in the toy department. It’d be a much healthier alternative to video games… Except the Wii. Wii Fit (and similar types of Wii fitness applications) might not actually replace a well-used gym membership, but at least it’ll get the couch potatoes active… and hey, it’s “playing”, not “working out”. The Wii rocks. 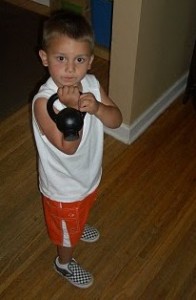 Are You Sure You Want To Work Out With The 5 Pounder? Maybe Little Jonah Can Spot You.Thanks to kettlebellathleticsblog.com

I’d love to see my kid (if I had one… four dogs are plenty for me) “working out with Daddy” with a five pound kettlebell. (I think even a toddler would laugh at the three pound kettlebell.) Of course, I’m not talking about teens. If they’re old enough to work out, they should be starting out with at least the ten pound one. By the way, my friend Steve Maxwell has a good older article on encouraging your kids to exercise.

To be fair to those who might actually be interested in these micro-sized kettlebells, I looked at reviews at various websites that sold these. Surprisingly, the reviews highly rated these products. I guess the one good thing about such a tiny, tiny, tiny sized kettlebell is that it definitely is not intimidating. Perhaps these paperweights are just what some very unfit need to get off the couch. Again, though, I remain standing by the fact that most people in the general public don’t fit in this category. Of course, walk into any buffet in America, and you just might beg to differ.

I’ve always looked forward to seeing kettlebells become more well known, because I know it’s such an effective tool. But at the same time, I’ve always also wished it could be a little known secret. Way back in 2001, when someone on the forum asked if the kb was going mainstream, I definitely had my opinion (check it out… under the post by “WarpedMind”) that it would be best if it remained that way. 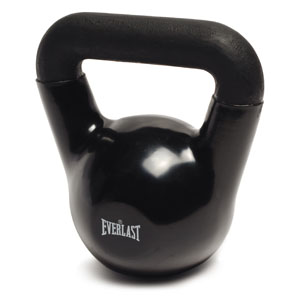 Imagine The Great Muhammad Ali Training With This. This Kettlebell Would Float Like A Butterfly... And Stink Like A Behind. Ok, Bad Joke. Sorry, Couldn't Resist.

Now it has hit the mainstream and I see the kind of crap that the commercial world is coming up with to corrupt the kettlebell culture, I really wish it remained somewhat unknown. I guess the secret is out. Commercial Corruption is here to stay. Three and five pound minibells. Jillian Michaels doing kettlebell training on “The Biggest Loser”. What has this world come to?

All I can say is, there is alot of good stuff out there… but “Buyer Beware”. Research before you buy. If you want to learn about kettlebells, learn from a certified trainer or coach. Don’t learn from a celebrity simply riding a wave. And don’t just buy something because it’s on a store shelf and has the word “Kettlebell” on it.

With that lesson learned, I leave you with this video of the great Jillian Michaels, showing us how to injure ourselves. *Shudder* I guess her technique would be safe with that five pound kettlebell. Maybe. (Editor’s Note: Since the publishing of this article, the original video has conveniently been removed. On a search, the only videos of Jillian training with kettlebells seem to be a somewhat “new and improved” version. I guess the kettlebell world’s feedback made its way to the powers to be. Thank goodness. So the video below replaces the original.)

What is your opinion on the commercialization of the kettlebell? Is it a good thing or are the cons outweighing the pros on this one? Is any publicity better than nothing? Or do you wish it was still “our little secret?” Let’s hear it. Maybe I’ve got this whole mini-bell thing all wrong. I have to admit, I’ve never worked out with a kettlebell that small. Please leave a comment with your opinion… no holds barred. Oh, and by the way, if anyone actually HAS a 5 lb. kettlebell, I’d really, really love to hear from you in the comment area. I’m curious as to what sort of review you’ll give.

Check out the accompanying gallery of mini-kettlebells…