In The Battle Of The Bulge? Avoid Boredom. 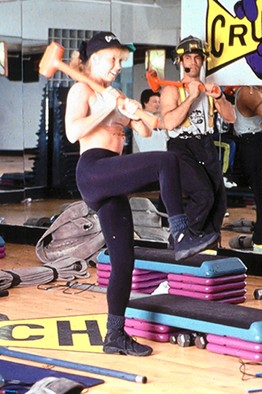 It happens at certain times of the year: The day after you’ve stuffed yourself with a stuffed turkey; the day you realize that summer is right around the corner and so is the beach; the day people bring out a cake along with black balloons; the first day of a new year and a “new you”.

Hammer Time At Crunch – Yes, That Is Actually A Guy Dressed Like A Fireman In The Background. No Comment.

Out-of-shape people everywhere, at one point or another, decide that they’ve “had enough” and they march into their local gym for a membership, determined to start making changes. All too often though, that determination fizzles. Why? Usually it boils down to a few different reasons… among the culprits is the feeling of being intimidated by the equipment and not knowing where to start, a lack of guidance and motivation (which is similar to the previous reason… but add to it not having to be accountable to anyone and not having anyone push you or encourage you), and, well, boredom.

There’s always been two main ways to work out. You either: a) went to a hardcore gym where everyone’s biceps are bigger than your head (intimidating on many different levels for the 98 lb. weakling or the 298 lb. couch potato), or b) you could go to a Ken-and-Barbie health club where there were rows of stationary bikes propped in front of TVs, chrome and plastic-covered dumbbells, and some machines that made you scratch your head trying to figure out how to use it. 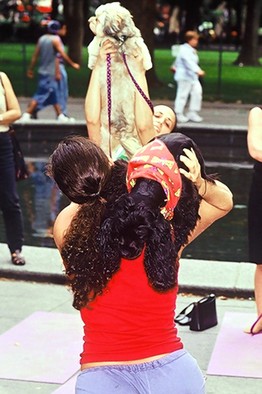 Here’s A “Ruff” Workout For Ya – Press Your Pooch To Lose The Pouch!

No wonder that there are so many gym members on paper, but very few at the gym. In fact, according to the International Health, Racquet & Sportsclub Association, 50.2 million people belong to a health club in the U.S. However only 35% visited more than a hundred times a year.

Well, finally, club owners and trainers started to realize that more was needed than simply a place to work out. It’s not enough to provide some equipment, some high-tech machines, and a loud stereo system blaring “St. Elmo’s Fire” or “Eye of the Tiger”. It was just as critical to provide the new fitness newbie with guidance (as in instructor led programs) and a variety of interesting programs to keep the attention of these new fitness recruits. After all, the decision to march into a gym is often an emotional one, which means that it’s often a non-committal, fleeting thought that one can be easily distracted from, once the discomforting feelings that led to the epiphany is gone.

According to the recent Wall Street Journal article, “Gung-Ho at the Gym, Then Boredom Sets In“, an effective solution is to have a variety of classes… not just the standard spinning or yoga class, but other programs as well.

Dodge Ball – Work Out Your Frustrations – Here’s A Bunch Of Goofballs Getting Ready To Peg Someone In A Game Of Dodgeball.

Why are classes so effective? Well, for one, you have the camaraderie of those around you… many who feel like they’re gonna die, just like you, during that level 7 climb. The stronger tend to give encouraging words to the not-so-strong. The trainer is also pushing you. And afterwards, the secret, competitive side of you whispers inside, “Ha! I lasted longer than you!” The healthy competition tends to push one further than if that person to simply work out on his or her own. Another reason, again, is the cure to boredom. I mean, hey, what can be a more interesting workout than hoisting your dog in the air (yes, there really is a class for this), a game of dodgeball, or swinging a sledgehammer. It beats wandering around in a midst of machines wondering, “which one should I do next?”

High-end fitness chain Equinox adds new classes to the schedule every quarter, which the company says are based on the latest research and fitness trends. Recent examples have included an interval-training class called Tabata and an entire program centered on a rubber cylindrical weight called ViPR. 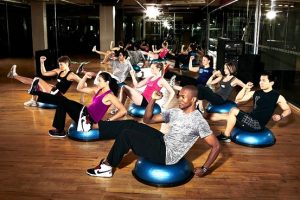 If curing the boredom isn’t enough, Crunch has added bribing as another incentive to battling the bulge regularly. Crunch offers a class called Motivation. If you attend six classes, you’re actually entered into a contest to win a trip to New York City to work out with Kelly Rowland, singer of the hit song “Motivation” (which also features Lil Wayne).

I’m glad that the mainstream fitness industry is finally starting to get it. I mean, sometimes it borders on silly… but hey, whatever works. If you’ve gotta sing, dance, cackle like a chicken, or bribe them… if it gets people into the gym on a regular basis, it’s good for the body and good for the industry’s bottom line.

I was disappointed that the Wall Street Journal article did not mention kettlebell training classes. After all, not only will they kick your butt more than a spinning class led by Lance Armstrong (who, by the way, works out with kettlebells) on RedBull, they’re extremely versatile and fun. With the right instructor and with a group of other fellow victims, er, workout partners, you will always be kept on your toes. A good, hardy CrossFit workout, to me, is the ultimate in variety and challenge wrapped up into a tidy little fat-burning, strength-building, butt-kicking, pain-loving package. It’s too bad they didn’t mention anything like this, but you know what? I think it’s great that American fitness for the general public is stepping it up. The day I see Russian kettlebells,

TRX Suspension Training, and Ropes Gone Wild is the day I’ll know that the Battle of the Bulge may someday soon see its end.