It’s All In The Wrist

Wrapping Your Wrist May Save Your Noggin

I’ve never dropped a kettlebell during a workout. Well, except when I’m doing some kettlebell juggling… but other than that, I’ve never lost my grip on one unless it was to intentionally squash a cockroach. (Ok, I’ve never actually used it for such crude (yet satisfying) purposes. I just thought I’d go with a little imagery. Work with me here.) 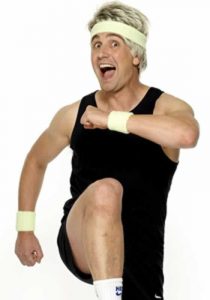 Sweatbands May Work, But They Won't Necessarily Make You Look Cool

A common fear among people who first hear of the Russian kettlebell is that, surely, it must be dangerous. Well, first of all, don’t call me Shirley. Um, sorry. Second, the cool thing about kettlebells is the fact that, the more you work out with them, the stronger your grip gets. This, in turn, greatly reduces the chances of your ever losing control of the beast.

It’s for this second reason, among other reasons, that I always encourage my students to master the two handed swing first, followed by the one handed swing. They on swinging the kettlebell higher as the confidence level allows. Once they are comfortable with swinging the kettlebell, they then progress to snatches for the overhead action. The reason I tell you this is to back the fact that, as long as you start off at ground floor with the two-handed swing and progress from there and avoiding working to failure, losing your grip should never be an issue, even for a beginner.

That said, as you slowly begin to be hypnotized into the kettlebell cult and you begin to push yourself harder and harder, the risk of a kettlebell accident increases, especially if you begin competing in kettlebell sport. Trust me. An iron kettlebell is not something you want to drop. Check out this kettlebell fail, courtesy of Tom Furman:

Yes, I know. He didn’t actually lose his grip in the video above. This drop is the result of fatigue. However, imagine if you combined the fatigue with a grip wet with sweat. It would be a very dangerous combination.

Which brings me to wrist wraps.

Minimizing the sweat is an obvious benefit, as it reduces the likelihood of dropping the kettlebell on your head and conking yourself into the land of Oz.

Wrist Guards Are For Sissies

Kettlebell sport (otherwise known as girevoy or competitive kettlebell lifting) is a sport that is very minimalist in equipment. Compare it with football, where each player is wearing a helmet, protective gear, and so on. Usually, when we lift kettlebells, many of us don’t even wear shoes in practice because of Pavel’s past workout recommendations. So it’s understandable why most people do not think about wristwraps.

Now, the wristwrap is not worn for the purpose that many beginners might wear them. When learning the snatch, beginners often get a goose-egg type of bruise on their forearms. One may think that wearing these thick sweatbands or wrist bandages is for the purpose of protecting this vulnerable area. But that’s not the reason we wear them. The sort of bruising you get from banging your forearm with a kettlebell during a snatch is the result of poor technique. Believe me, the small amount of material in a wrist band is hardly going to protect your forearm from a 16 kg ball of iron’s inertia. It might help a little, but not enough. Some beginners may choose to buy a wrist guard for this reason. I personally don’t recommend a wrist protector though, because we don’t want to encourage bad technique. It is my opinion that it’s better to feel the bruising, as feedback that you’re snatching wrong and then to fix it. Don’t mask the symptoms of poor kettlebelling. Tough it out and get it right!

The Real Reason For Wrist Wraps

The main reason wristbands are worn by kettlebell competitors (not all do though… the guy in the video above wasn’t. Of course, he also kb-butted his head!) is that they act like sweatbands, minimizing the amount of sweat that reach the hands. Minimizing the sweat is an obvious benefit, as it reduces the likelihood of dropping the kettlebell on your head and conking yourself into the land of Oz.

A second reason for wearing these is that they do provide a little muscle support and a feeling of security. Wearing a wrist wrap makes you feel that your wrists are just a little bit stronger. The compression of the bandages to the forearm muscle do lend support to the muscles and tendons in the forearm and help them maintain their strength and endurance longer.

The third reason is that they make you look like you know what you’re doing. Ok, I’m being facetious. But you know what? I’m sure there are some vanity reasons for a few of you guys out there!

For those of you who would like to give bandaging your wrist a try, check out this video below from my fellow AKC coaching colleague, Bao Tran:

World champion Valery Fedorenko recommends this specific bandage. Do yourself a favor. Spend the five dollars and spare your collarbone, head, and dignity.

As you can see, there’s not much to preparing wrist bands, and the benefits will be well worth the effort. Training with kettlebells can be a very safe or a very dangerous workout. It really depends on you. Personally, I like to reduce the chance of allowing my hands to get sweaty to the point that I drop a 32 kg kettlebell on my collarbone. Yeah, not exactly my idea of a good time. So do yourself a favor. Buy yourself a box of Ace 3 inch non-adhesive bandages. If it’s good enough for world champion girevik and master of sports, Valery Fedorenko, then it should be good enough for you. Spend the five dollars and spare your collarbone, head, and dignity. It’ll be the best five bucks you’ve ever spent!

Let’s Wrap It Up

In summary, if you’re a beginner, progress in stages of difficulty, starting first with becoming comfortable with the swing and work up to being confident in holding your kettlebell above your head. Don’t wrap your wrists just to avoid bruising your forearm while you learn snatches. If you are bruising yourself, go out and hire an AKC coach/trainer or RKC trainer to learn proper technique. Your forearms will thank you. In any serious workout where you are really working up a sweat, I highly recommend wearing some wraps to soak up the sweat and to give you the extra support to the forearm muscles and tendons. Your head will thank you.

If Achilles was a kettlebell lifter, his weakness would have been his wrist, not his heel. Don’t let it be yours.

What are you thoughts about wearing wrist wraps while working out or competing with kettlebells? Have bandaging up your wrists made any difference in your kettlebell performance? Please add your comments to this article. Let’s hear it!