Special "Who Wants To Be A Superhero" Edition of Kettlebell.com

Just after interviewing E. Quincy Sloan, I got the rare privilege of meeting TyVeculus as well. TyVeculus is one of the superheros featured on Stan Lee’s Sci-Fi reality series, “Who Wants To Be A Superhero”. Ty is larger than life. He demonstrated some of his powers to me… I never saw a guy move so fast. I showed him a pair of 2 pood (about 70 lbs.) kettlebells. He said, “Wow, these are cute!”, and to my amazement, he began to juggle them. Jeff Martone would be proud! As we talked, I found him to be very passionate about his opinions on justice and righteousness.

Just after the interview and as we were wrapping it up, several police cars sped by on the road just outside the Starbucks we were in, in pursuit of one of those “bigfoot” type monster-trucks. Ty politely excused himself and bolted out the door before I could say goodbye. A few minutes later, as I was driving home, I saw the same truck now on it’s side, surrounded by the police cars. The driver of the truck was already in the back of one of the squad cars. The officers were looking around the whole area and inspecting the crippled truck. TyVeculus was nowhere to be seen. The cops obviously looked confused… but I know who stopped that truck. Too bad he didn’t get to finish his Orange Mocha Frappuccino.

Ty’Veculus: Well, as the foremost Captain of the Terranian Guardians it is my commission to protect the earth form the shifty “Common Ones”. Integrity means life, so I’m constantly worried about making wrong choices that could potentially put humanity at risk. I truly believe 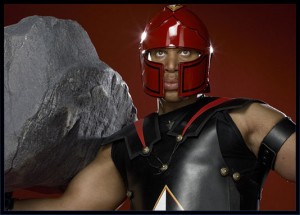 By The Source Of Light, I Am TY'VECULUS!

in humanity and will do my utmost to stop Omexsis from destroying mankind.

Kettlebell.com: Today we’re talking with TyVeculus, one of the world’s last superheros and a star of “Who Wants To Be A Superhero”. Thanks for spending some time with us. We’ll be quick, so you can get back to saving the world.

TyVeculus, tell us a little about yourself.

Kettlebell.com: What does your name mean?

Ty’Veculus: My name was given to me by Nathanial, my mentor, and means “Protection and Strength”. 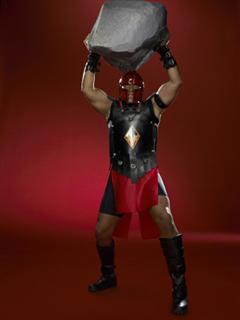 TyVeculus Is Slightly Stronger Than Your Average Girevik

Kettlebell.com: What are your powers and how did you get those powers?

Ty’Veculus: Unimaginable strength, based on a collected gene pool over 1800 years. Speed, not just because of my dense muscle mass but I can also open portals using perpetual motion as an energy source. Invulnerability to fire… I can’t be burn. And I have the ability to hear the truth of the heart. Nathanial put an organic chip in my brain computes one’s reaction after a question, such as body temperature, perspiration, pupil dilation, etc. The result is the whisper truth of the heart. Nathanial created all of the metabolic technology based on my genes.

Kettlebell.com: Wow, that’s pretty cool. I have to say, I got to watch you demonstrate your strength. You are amazing! Every hero has some sort of weakness though, right? What’s yours?

Ty’Veculus: Well, although I’m very powerful, maintaining my integrity is essential to my well-being. In other words beauty can disguise evil and if I’m not careful I can be tempted and lose everything.

Kettlebell.com: Do you have any arch enemies?

Ty’Veculus: Yes. Omexsis and the “Common Ones” are here to destroy humanity, take the earth, and our solar system for themselves! 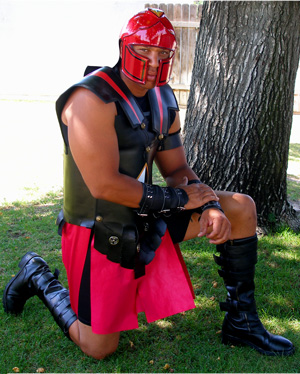 TyVeculus kneels down to us mortals' level.

Kettlebell.com: What is your pet peeve?

Ty’Veculus: My pet peeve is the total disrespect for human life.

Kettlebell.com: You are a superhero that is not perfect, but learns from mistakes. Give us an example of how you learned from a mistake while being a superhero.

Ty’Veculus: Once I had the chance to kill a gang member who critically shot my brother, who is a police officer. As I started to choke him, I notice I started to feel the bullets being fired by his partners that where hitting me from behind. I realized instantly that my power was directly linked to my integrity. Needless to say, I did not go through with ending the ignorant one’s life. If I had taken his life, I’d be no better than the “Common Ones”.

Kettlebell.com: What are your plans for the future?

Ty’Veculus: Doing everything I can to stop the “Common Ones” behind the scenes until humanity is ready for me to go public.

Kettlebell.com: Ok, now for a serious question… boxers or briefs?

Ty’Veculus: Briefs, for sure… I need my support to be aerodynamic!

Kettlebell.com: Well, Ty, we really appreciate you making some time between bad guys to answer some of our questions. Be safe out there… we’ll be rooting for you.

Click here to read our interview with TyVeculus’ alter-ego, E. Quincy Sloan, star of Stan Lee’s “Who Wants To Be A Superhero?”

Tom Grow, editor of Kettlebell.com, has been a fan of the iron kettlebell and a student of Pavel Tsatsouline’s training techniques for several years. Having recently lost over thirty pounds, he is now pursuing a career in personal training.