Wrestling Drills For Strength And Conditioning

Get Into Shape While Improving Your Wrestling Skills

…wrestling, like lifting heavy weights, is necessary for a strong, healthy, virile body.

Wrestling is a sport based on shoving, grabbing, slamming, pinning, and otherwise controlling an unwilling opponent. Although many other sports, such as football or rugby, incorporate these strategies to some degree, it is the primary goal of the wrestler. It is easy to see then these guys are some tough SOBs. In fact, wrestling has been one of the primary means of demonstrating manhood across cultures and throughout history. From Icelandic glima to Japanese sumo to Turkish oil-wrestling almost every culture has had some indigenous form of grappling. A quick read through anything written by early European and American physical culturists such as Hackenschmidt, Leiderman, and Sandow will reveal a consensus – that wrestling, like lifting heavy weights, is necessary for a strong, healthy, virile body. However, at some point this connection between strength, physique, and wrestling was severed leaving many guys with buffed-out beach body muscles they couldn’t use to defend themselves if they had to.

The intent of this article is not to make anyone feel insecure or start some sort of physical culture revolution. My goal is to reintroduce some exercises and training methods were lost to the strength and bodybuilding world when lifting and wrestling parted ways. These exercises are designed not only to build strength and endurance, but also to add some mental toughness and competitiveness to a possibly stagnant training program. Incorporating some of these drills into your program will work your muscles in ways you didn’t know possible – and also to reconnect with your inner barbarian. So read this article, watch Conan, and then give these exercises a try.

Wrestlers use this drill to practice getting into position to pick their opponents up and put them down hard. Begin with an over-under grip on your opponent as shown in photo A. You must maintain chest-to-chest contact with forward pressure as if you were trying to push your opponent back. Next both people will swim their right arm under the opponent’s left arm. Their heads will switch sides and the result is another over-under position. Practice this motion slowly until it becomes fluid then gradually speed it up.

The point of the drill is that both wrestlers are simultaneously trying to achieve the double underhook body lock shown in photo C. This is a basic wrestling position known as the bodylock and is used for lifting the opponent. Since it is cooperative it becomes a smooth pattern in which both people try but never actually get to the bodylock. This version makes a great warm up drill or can be done for several minutes to train arm endurance. For competitiveness, toughness, and hardcore conditioning make it a contest. Both wrestlers start in the over-under position and try as hard as possible to swim both hands in and get the bodylock. During the drill they must be careful to pinch their arms in tight to prevent the other guy from getting the inside position. Once someone gets a bodylock release the grip and start again. It is amazing how much endurance it takes to go live on this drill. 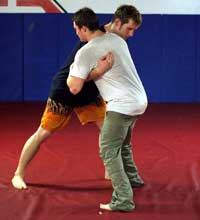 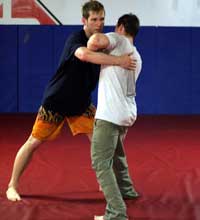 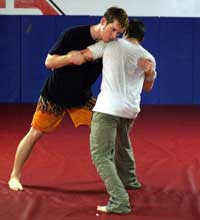 The Three Steps Of Pummelling 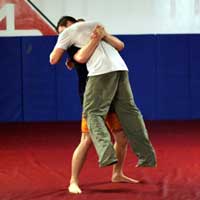 Starting from the bodylock position sink your hips then explosively pop the other guy up into the air. Use the combined power of your legs, hips and lower back. This drill trains your core and lower body in a manner similar to the triple extension of cleans and snatches. There are a few of ways to incorporate the bodylock lift. First you can simply get the grip and lift doing several repetitions before switching off. You can also execute the lift then hold your partner up in the air while walking for a specified distance at which point you switch roles. For a dynamic and exhausting variation, combine the bodylock lift and pummeling drills. Practice the pummel for a few seconds, get the lock, then lift and carry. 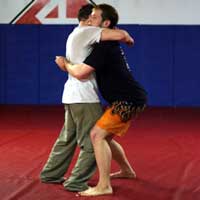 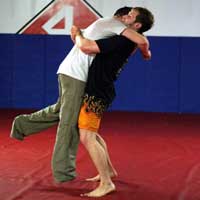 For a total body workout with emphasis on the chest and triceps nothing beats this exercise. The partner shove drill requires a bit of space so find a basketball court or track if possible, if not then just find a clear lane of at least 30 feet long. Stand facing your workout partner with your hands on his chest and elbows bent as in photo *. Step forward with one leg and shove him as hard as possible using your combined upper and lower body power. Keep a forward lean and tighten your abs for maximum effectiveness. Your partner should anticipate the shove and go with it a bit while trying to keep his balance. Then you step forward and shove him again, repeating the drill until you get to the end of the lane. It is important to put everything you can into the drill and try to move him as far as possible. 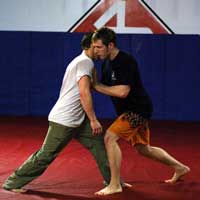 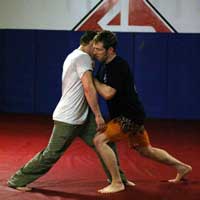 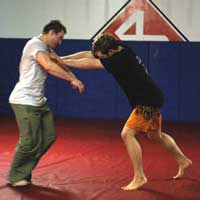 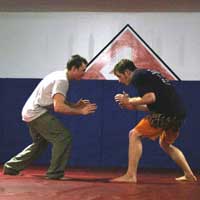 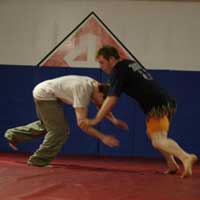 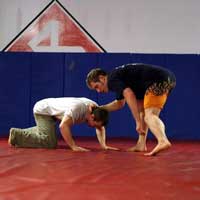 If your gym has a mat room or other space with a padded floor use it for this drill. If not, you should still be able to sumo wrestle with minimal problems on a basketball court. Find some space and mark off a square about 10 to 20 feet across. You can use tape or simply put some cones or other items to mark the corners. The goal is to shove your partner out of the ring or make him touch the floor with something other than his feet. No throws or trips are allowed just raw effort and aggression. Get low and drive forward to off-balance the other guy while maintaining your own balance. You’ll find your own methods of accomplishing the goal through trial and error but the great thing is it doesn’t really matter because the whole time, win or lose, you’ll be getting one hell of a workout. Just to be safe it is a good idea to wear a mouthpiece. Here are the fundamentals that will help you beat your partner:

•  Stay low and push the other guy forward and up. If you can get him up and on his heels it should be easy to send him backwards. The principles used in the shove drill previously described work well here.

•  Circle step and spin the guy out if he is driving hard and your back is close to the edge of the circle. This is the basic principle of redirecting his energy against him. Just think of yourself as a door that is closed. As your opponent pushes into you, swing open, and send him on his way.

•  Snap the guy down so that he has to catch himself with his hands to keep from doing a face plant. If the guy is pushing forward hard and is bent at the waist grab the back of his head, pop your hips back quickly, and shove his face towards the floor.

Make sure you share these techniques with your workout partner prior to training so he’s able to give you a good fight.

Incorporate these exercises into your lifting days or do them on off days as part of your cardio/conditioning program. The bodylock drills work well as a warm-up or “finisher” exercise on leg or lower body days and the pummelling and shove drills can be added as part of an arm or upper body workout. Sumo wrestling is hits about everything in your entire body so try a few rounds of that instead of jumping on the stair climber or treadmill for your cardio training.

Kettlebell.com staff writer Brian Jones has been involved in strength and conditioning for over a decade. His formal education in the field includes a master’s degree in exercise physiology and certifications from the National Strength and Conditioning Association and USA Weightlifting. He is currently pursuing a Ph.D. in exercise physiology at the University of Kentucky.